The History of Grampound Village Store

The story of Grampound Village Store and Coffee Shop began at the end of 2012 when the community heard that the Hollies Store and Post Office, the last general store on Fore Street, would be closing in June 2013; Graham and Jenny Gingell, the shopkeeper and the postmistress, had decided that it was time to retire. Many in our community understood that the loss of the shop would not merely be practically inconvenient but, with the loss of a place to congregate, it would weaken the social cohesion of the village.

At a well-attended village meeting the idea of setting up a community enterprise was born. A Steering Group was formed and, under the joint chairing of Margie Lundie and Peter Wootton, started its work in the winter of 2013. One of its first actions was to contact the Plunkett Foundation, an organisation that has been supporting community and cooperative ventures for over 100 years. Their advice and encouragement proved vital over the next 18 months and it was on their recommendation that the Steering Group organised a community share issue. This was designed to make as many Grampound residents as possible stakeholders in the venture and thus to provide tangible evidence of local support.

The share offer was successful beyond the wildest imaginings of any of those involved, raising over £20,000. This provided a platform for further fund-raising and enabled the Steering Group to secure £18,000 from the Prince’s Countryside Fund, £7500 from the Airvolution Community Fund and £2000 from the Esmée Fairbairn Foundation. The Grampound with Creed Parish Council was supportive throughout, assisting with planning applications and contributing £4000 from their own funds.

The Hollies Store closed in the summer of 2013 and local residents felt its loss sorely. Considerations of speed and cost-effectiveness led to the decision to locate two portable cabins on land adjacent to the Village Hall and owned by the Village Hall Trustees, who were enthusiastically supportive throughout. It provided an easily accessible site with good parking and close to the village primary school.

Progress during the set-up period was greatly accelerated by the arrival in the village of new residents Helen and Irving Bunt who brought with them extensive experience of project management and knowledge of the building industry. Two portable cabins were secured; one was donated and the other purchased and Irving Bunt personally constructed an excellent decking area in the right angle between the two. 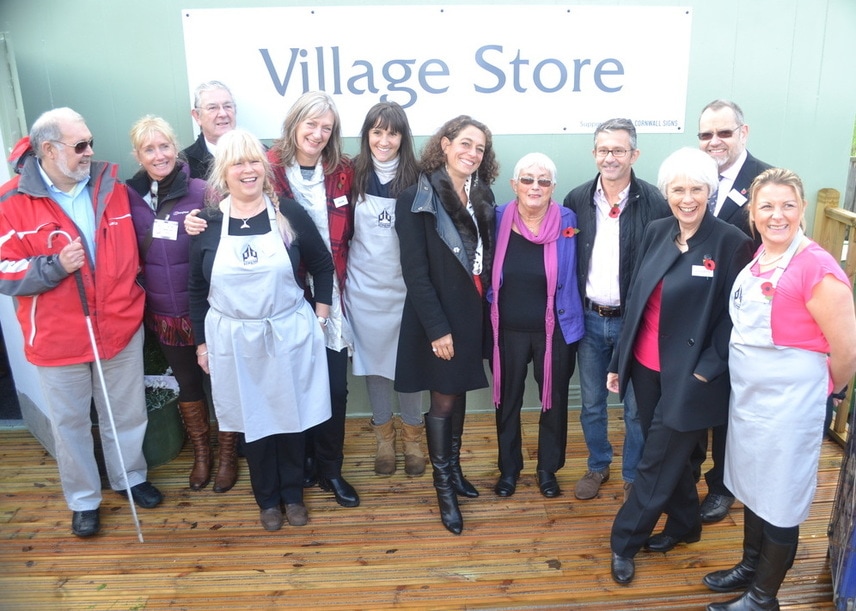 The store and coffee shop grand opening in November 2014 with members of the Steering Group and special guest Alex Polizzi.